I knew today’s game was going to be a good one. First off, this was the first game all week that I didn’t go to alone. I was going with Nina, Jon and Roxie, and their daughters Julia and Natalie.

Randy Wolf became one of Julia and Natalie’s favorite players after he signed a softball for me that reads “Happy B-Day Natalie! Randy Wolf”. Ever since then, Julia said he’s one of his favorites. Natalie’s still little enough that she doesn’t remember who all the players are. Nina and I were running a little late and got to the gate about ten till five. We walked to the gate and then down the street a little to find them. Hopped in the car and waited for the gate to open. We walked in and went down to the field level to see if we could get the girls any baseballs. No luck. As cute as they are, how did they not get a baseball??? They were wearing Wolf shirts and visors I had made for them. (Oh, yeah. I forgot my Wolf hat in the car. Didn’t realize it till we got into the stadium). 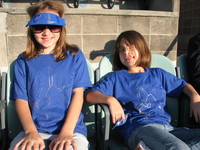 Several people (including Ernie – my wonderful usher, and Ken Levine) asked me how my lip was. (In case you didn’t know, I got hit by a baseball yesterday). Batting practice went by quickly. When the Dodgers left the field, Jeff Weaver came up to a kid and gave him a bat. I was talking to Cari and Kristin when a ball bounced off the foul pole and a guy standing two seats away from Nina caught it. I’m quite relieved it did. I did not want to get hit again and not get the ball. Very possibly could’ve happened.

The grounds crew came out to paint the lines. I asked one of the guys which guy drove the tractor. He told me the regular guy wasn’t here today. He asked me why I wanted to know. I told him what happened yesterday. He was like, “really? sorry!” He said they’ve been on the tractor guy about doing stuff like that and being careful. He made one of his crew members go get me  ball from the pen. He said he couldn’t wait to give the guy a hard time. They’ve been on his case about it because they didn’t want something like what happened to me to happen. It was fun talking to him. He said he was going to text him and tell him what happened, that I was mad and going to tell the Dodger’s Front office (which I wasn’t! Mad or going to tell). He looked like he was going to have some fun with the guy. I told him, I wasn’t mad. Just wanted to know who to look out for. (Plus, it didn’t help that the guy I was talking to is REALLY good looking. Man, they employ too many good looking guys at Dodger Stadium).

Here’s a picture of him from the Angels’ game. It’s just his back, but you get the idea. 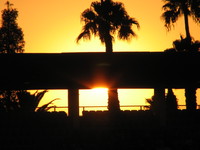 After Cat came back, we went up to our seats. The sun hadn’t set yet, so we had the sun in our eyes for the start of the game. Wolfie gave up four runs in the seven innings he pitched. Does that qualify as a quality start? Not sure how many of them were earned. I know he caught the Kershaw bug and walked in one run. But you know what? Wolfie even got a hit and his first career stolen base!!! Which I missed because I got up to get some napkins. That is why you never get up when a Dodger is batting. 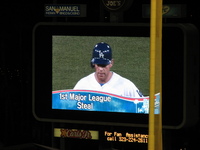 I did happen to get a beautiful picture of the moon while I was up. My friends left after the seventh inning stretch, so it was just Nina and me. The guy in front of me kept standing up and blocking my view. Since we had four extra seats now, I moved over. There was moment in the ninth inning when Andre chased a foul ball that landed in the stands. I saw him stand at the wall for a long moment. Turned out, the ball hit a kid in the face. Is there anyone out there who wants to ask that kid, were you paying attention? Because I was asked a lot of times when I got hit if I was paying attention. Of course, his was a million times worse because he was on the receiving end of a batted ball. Oh, and this wasn’t some little kid either. But if i had to guess, I’d say somewhere between eight and ten. 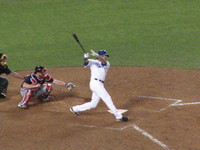 Andre must’ve taken the kid getting hit to heart. Even though in the post-game show, he said he hit the home run for Lucy for her birthday … I like to think it was also for the kid who got hit by the foul ball. With Andre up to bat as the possible winning run… I told Nina, “watch. Mr. Walk Off right here.” BAM! Sure enough. Walk-off homer to win the game.

Umpire watching to make sure Andre touches home plate before he gets mobbed and thrown to the ground and piled on.

Nina and I made our way down to the third baseline club. Ken saw me come in and he said hi. I showed him the Dodger magazine with my picture in it, which he was gracious enough to sign. Before the post-game show started, I went to the bathroom. Didn’t see the puddle of water on the floor that someone was cleaning up. Let me tell you something I learned in college. Puddles of water and flip flops don’t mix. Whoosh! Down I went. Thankfully, the only thing that got hurt was my pride. Which, after being burned with a marshmellow that I was roasting and getting hit by a ball, and slipping on seat earlier today… my pride already had some major dents in it. So slipping on a wet floor wasn’t going to do that much damage. That was just the kind of clutzy week I’ve been having. It’s kinda funny how many of the KABC employees now recognize me and know me for my Wolf hat. One of the guys jokingly kicked me out because I forgot it today. And look what happened. Randy got his first no decision since he changed his jersey number. 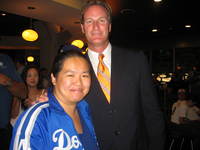 Steve Lyons came in just as Dodger Talk was going under way. A bunch of us yelled out to him. I wanted to go over and get another photo with him. I was thinking, do I have anything for him to sign. Wouldn’t you know it? Today, as I was getting ready for the game… I took his 1989 White Sox baseball card out of the case where I have an autographed photo of him and me and put it in my baseball card case. So, I went over to the bar where he was. He was talking to someone else (a former baseball player who I didn’t catch the name of). I got his attention (forgot if I tapped him on the shoulder or called his name) and he said, “hey Linda, how are you doing?” and gave me a hug! I was first of all surprised he remembered my name (not sure if we were ever formally introduced, so he must have gotten my name some other way) and even more surprised that he gave me a hug. I told him Diane (a mutual friend of ours, she went to high school with him) said hello. He asked if she came to the game and I said no, she went to the Hollywood Bowl. He asked who was playing and I said I didn’t know. But I told him she was coming to the game with me tomorrow. Then I asked him to sign the baseball card. I think even he was surprised I had one. Everyone around me was surprised. A lot of people were like, “she has a REAL baseball card of HIM?” Mind you, it is a 1989 card… 20 years old! Well, maybe not the card itself. I certainly didn’t have it for that long. After that, I had to wait as my two sharpies (black and silver) got borrowed by other fans who wanted Steve’s autograph and the other guy who was there. I asked someone who that was, and he said it was player from the 1988 World Series team. I couldn’t catch the name. Before anyone jumps all over me, remember, I have only been going to Dodger games since 9-2-2006 and don’t know too many players from before then. A lot of fans were just getting either their ticket stubs signed or a hat.

One of the KABC employees (Aris or however you spell his name) saw me and asked me if I saw the latest Dodger magazine. I was in it. Of course, by then I had seen it. Then there was Jeffrey who was amazed how prepared I was (with all the sharpies and the baseball card). And I even showed him my picture of the Manny Ramirez grand slam. He said I have skill. Or something like that. The one earlier who teased me about the Wolf hat saw me coming up to Josh and asked me, “are you leaving? You can’t leave yet!” I was just getting Josh to sign the magazine since Ken already signed it. Actually, we did leave after that. I was worried about the gates closing before we could get out (since we parked outside of the Stadium). Funny thing was, the gates were still open when we left. And the Dodger Talk show ended just as we got into the car. Over all, a good way to bounce back from the night before.